Jeopardy! was a French-language version of the game of answers & questions.

Three contestants competed, trying to win money by correctly phrasing answers in a form of a question.

The contestants faced a game board of six categories each with five clues behind money amounts (30 in all). Each round lasts 6 minutes.

On a player's turn, he/she selected a category and an amount, then a clue was read. The first player to ring-in with a correct question won the value of the answer, but if he/she rung in and was wrong, the value of the answer was deducted from that player's score and the other player(s) had a chance at it. Contestants could not ring in until the clue was fully read. The player who gave the correct response (or, in the event that nobody gave the correct response, was the one who picked the clue) chose another clue. The round continued until time ran out or if all the clues were played.

Contestants who finished Double Jeopardy with $0 or less were eliminated from the game. 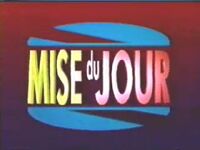 The players were shown one last category, then during the break wrote down how much they wished to wager. The clue was then revealed, after which the players had 30 seconds to write down a response.

The player with the highest score at the end of the round won the game and their score in cash.

Based on the American game show of the same name by Merv Griffin.

First portion of an episode (Gilles/Fernand/Stephane; ends shortly into Round 1)
Most of another episode (Claude/André/Robert), no credits: Part 1, Part 2

Community content is available under CC-BY-SA unless otherwise noted.
Advertisement