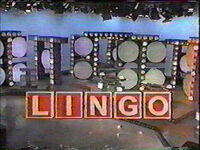 This is a French-Speaking Quebec version of the game of letters & bingo.

This version of Lingo ran for 439 episodes on Radio-Canada, from 1998 to 2001. It was hosted by longtime actor and radio/TV host Paul Houde.

The object of the game was to win cash by taking five guesses at a mystery five-letter word puzzle. If at any time a team made a mistake, such as taking too long at a guess, misspelling a word, spelling a word that doesn't exist, spelling a word that is not five letters in length, repeating a word already guessed, or giving a word not starting with the established first letter, control went to the other team, who were given a free letter unless only one was missing. The team that guessed the correct word received $50.

At the start of the match, both teams would receive a Lingo board, with the red team playing with odd numbers and the green team playing with even numbers. Eight numbers would be marked off on each of their boards. Once a team successfully completed a word puzzle, they would have a chance to pull out two numbered balls (one per player) out of a hopper. Once a team completed their Lingo board, by getting five in a row across, up or down, or diagonally, they won $100. If however they pulled a black ball from the hopper, they would lose their turn and control went to the other team. (The black ball was known in French as, "L'infâme boule noire!", meaning "the infamous black ball".)

At some point during the match, a bell rang, signifying the match would end after the current puzzle in play. After the puzzle was solved and two balls had been pulled out, the team with the most money became the day's champions and advanced to the "No Lingo" bonus game. The match would also end when either:

The runners-up would receive a consolation prize.

If the match ended in a tie, another five-letter puzzle was played with the teams alternating lines until one of them correctly guessed the word and won the match.

The winners would play the "No Lingo" bonus game in which they were presented with a new Lingo board with twelve numbers marked off. Before the first puzzle, they would be guaranteed $50 regardless of what happened afterward. The $50 would double to $100 for the first puzzle. Puzzles in this part of the game were again five-letter words, only this time with two letters given (the first letter of the word and a second letter somewhere else in the word). Each line used would add a Lingo ball to be drawn. If the team failed to guess the word after the fifth line, they had to draw six balls (one for each line plus an additional penalty ball as they completely missed the word). Once they made the required number of draws without getting Lingo, or getting a gold ball (known in French as "boule d'or") at any time (which ended that round of draws, though the ball would be put back in the hopper for a future draw), the team would be given the option to take the $100 and quit, or continue on and play for double, going through the same procedure as before, right on up to the $1,600 level. Should the team avoid getting a Lingo at this point, they would return on the next show to defend their championship. If there was any time left in the show, a "sprint" game for $100 a word would be played with only the first letter of each puzzle showing. However, if the team did get a Lingo, they would lose all the money accumulated (except for the $50 given at the start), and then play the "sprint" game to build up as much money as possible until show was over. Also, by virtue of getting a Lingo here, they were retired as champions and two new teams would compete on the next show.

Based on Lingo by Ralph Andrews

Retrieved from "https://canadiangameshows.fandom.com/wiki/Lingo_(QC)?oldid=6376"
Community content is available under CC-BY-SA unless otherwise noted.