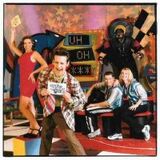 Uh Oh! was a children's game show that lasted from 1997-2003 on YTV for kids. This show was hosted by Wink Yahoo. The show had kids answer questions and partake in wacky challenges.

Uh Oh! was based on a game show parody sketch on another YTV show, It's Alive! during its second season, where contestants were chained up and answered questions. If a contestant answered incorrectly, a man known as "The Punisher" would pour slime on him/her from the rafters. In the third season of It's Alive!, realizing that the game show parody could actually work as a real game show, Uh Oh! debuted as part of the slate of game shows during the show's segment. The game was much shorter than its spin-off, with the game consisting of one round of two spins each. Quickly becoming the most popular game show in the segment, the game was played more frequently than its other games. Shortly after It's Alive! ended in 1997, Uh Oh! later became a show of its own that same year, playing with exactly the same rules as when it was on It's Alive!, except that there were now two rounds, with an additional round between the two rounds called Slime Tour, which was based on the obstacle course segment from It's Alive! involving different contestants who were competing against with each other in their own competition. (See Round 2 section below)

There were three teams, Red, Blue, and Green with two kids on each team competing in three rounds of competition. Two of the rounds had the players spin a wheel to determine their fate and decide what games to play. The goal of the game was to have more points than the other two teams to take home the grand prize. Audience members would also pick sides and wear clothes of the colour they supported. Each team member would either spin the wheel for half of the game or participate in whichever activity the wheel landed on. The team members would participate in games which would nearly always involve goo and would be silly. If won, games would provide points for the respective team. In the Uh Oh! sketch on It's Alive!, Blue took their turn first, then Red, and then Green. When Uh Oh! later became a show of its own, Blue went first, then Green, and then Red.

Here are the games the players had to face:

During Round 1, one player from each team were designated to spin a 12-space segmented wheel which featured a variety of possible activities or results that could occur. Their partner, who was located at the other end of the studio and equipped with goggles, was designated to perform the activity that the wheel landed on. Each team took turns spinning the wheel, with two cycles through the three teams.

The second round featured the Slime Tour, which featured some footage shot at another location elsewhere across Canada. In its first season, the Slime Tour was played mainly in Yukon. Three contestants, dressed in Yellow, Orange, and Purple, competed in a themed obstacle course race. As mentioned, the Slime Tour was played the same way as the obstacle course segment on It's Alive!. After the contestants were introduced, the three teams within the studio had to select which colour contestant they thought would win the race. If they were right, they earned 35 points; otherwise, no points were awarded if they pick the runners up.

The obstacle course was generally made up of three different activities separated by a distance that would have to be run. Some of the activities required a physical skill; others simply required speed at completing a task. There was usually at least one task in each course that would get the contestant messy, and usually a task that required carrying or wearing something throughout the rest of the race. The winner of the race won a prize for himself/herself with a different prize going to the runners up. During Season 4, the Slime Tour was sponsored by Sunny Delight with the sponsor located on the back of each of the contestants' shirts. During the show's run, the Slime Tour visited the following cities across Canada:

When the Slime Tour changed its name to Field Games during the final season, all of them were played in Toronto instead.

The third and final round was played essentially the same as the first round, with the players switching roles with their partners. The wheel itself was replaced with an entirely different design. The wheel in the third round was stationary, and the indicator spun. The indicator was designed like a three-blade propeller; each blade was the colour of one of the teams, and framed the space on the wheel it landed on. A team landed on the space marked by the indicator of their colour. Spaces on the wheel were occasionally changed between seasons. Fixed spaces in Season 1 included three Uh Oh! spaces, three Mayhem spaces, two Speed Round spaces, one The Dump space, one Win and Spin space, one Lose and Spin space, and one Trade and Spin space. In Season 2, one of the Uh Oh! spaces was replaced with the Uh Oh! Deluxe space. In Season 5, the Uh Oh! Deluxe space was replaced with the Pick It! space; and in Season 6, it was replaced with the Fruit Gushers space.

During Season 1, Wink interviewed both partners before starting the game action. It would often involve the previous round's action, and opinions for revenge on partners. The game ended when the team with the most points won the grand prize. If the game ended in a tie, a jump-in question was read. Whoever buzzed-in first with the correct answer won. Otherwise, their opponent would automatically win the grand prize. In a three-way tie, the two remaining teams would have a shot at the question. During early Season 6, an alternate tiebreaker was used in which the partners of the spinners involved in the tie bobbed for one Fruit Gusher each simultaneously at the Fruit Gushers station, this time with no time limit, and the one who got the higher point value (colours didn't count here) won the points and the game. Towards the end of the season, the original tiebreaker was reinstated.

Take you on a ride, to a place that's live
Where the music is pumpin' to make you vibe, where there's always something new around the corner!
Gonna play a little, "Uh Oh!"

Make you jump to the beat because it's time for a treat with the questions and answers,
so try to compete, when you're time's up and through, say, what ya gonna do?
Let me hear you scream, "Uh Oh!" (UH OH!)Spin the wheel, Speed Round, Mayhem, Uh Oh! (UH OH!)

Retrieved from "https://canadiangameshows.fandom.com/wiki/Uh_Oh!?oldid=6648"
Community content is available under CC-BY-SA unless otherwise noted.